It’s been over a week since we closed, but I’m in serious denial that we’ve put Romeo & Juliet in the books. I’ve done a LOT of shows in the [number redacted] years that I’ve been in theatre, and – other than the obligatory bittersweet farewell – I’ve been able to accept the show closing and trudge forth. Not so with R&J. I keep using euphemisms for “over”, because to think that this production is done forever feels like being punched in the stomach repeatedly. In fact, I barely believe it actually happened. Did I dream it?

If you read my guest post on the lovely and talented Yvonne DeSalle’s blog, or if you’ve ever talked to me about Shakespeare for more than two minutes, you’ll know that I’ve wanted to play Juliet since I was younger than Juliet’s actual written age. It’s pretty weird when a long-time, fondly held dream comes true. It’s as if you’ve trapped a brilliant star from out of the sky, ingested it, and suddenly starlight is shooting out of your fingertips like whimsical tractor beams. Or something. Romeo, poet that he is, says it better: “I am afeared/…all this is but a dream/Too flattering-sweet to be substantial.” 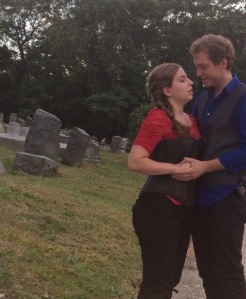 Not only was it a wish coming to fruition, but it also felt surreal because our production was nothing short of magical. As a theatre practitioner or even a theatre-goer, you’re likely to hear the phrase “theatre magic” every once in a while. It might sound hokey, or like something torn from the pages of Harry Potter, but I’ve witnessed this magic many, many times. Sometimes it reveals itself when a production that isn’t gelling suddenly comes together. Sometimes it’s a spark that ignites when a show goes up in front of an audience and reaches a new level. And sometimes it’s something even more intangible.

When I was in high school, I played Brooke in the delightful farce, Noises Off. Our director began the rehearsal process with a back-up play in mind in case we couldn’t quite execute the antics of the physical comedy-heavy second act. It’s a demanding show, and the intricacies of it can be too much for a bunch of high school kids to perform. We did it, though, and we did it well. The director and performers were all quite talented, but it also had to do with the group as a whole. We clicked. We had a lovely chemistry that translated to stage, and made the production better. It was truly exciting, and would have been nearly impossible to reproduce.

Romeo & Juliet felt even more enchanted. To take nothing away from the myriad other fantastic shows I’ve been lucky enough to do, this has been the single best theatrical experience of my life. No hyperbole. And it’s not because the other actors were incredible (they were), or because the direction was compelling and inspired (it was), or because the fights were awesome and the show was managed with care and precision (both things, also true). It’s because of the magic. It was certainly not without its challenges or hiccups; it actually had more than its fair share (including, but not limited to, a floodlight that died inexplicably during every single performance, and a fireworks display which loaned its bombastic voice to more than an entire act of our final show). But those weird and frustrating obstacles made it feel all the more miraculous. Stars aligned in our favor more often than not. And yes, like my high school production of Noises Off, the group as a whole, and every individual with one another, had rare chemistry that seldom happens in so many permutations all at once. 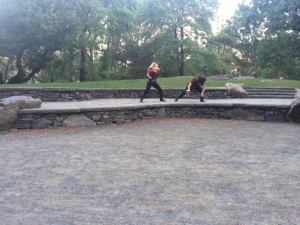 I could write a book’s worth of pages, attempting to explain why The Fools & Kings Project’s Romeo & Juliet was so special. Still, it really comes down to something intangible that made this show more than just work. It sang. From an apartment in Astoria, to a shore house in Maryland, to a cemetery in New Jersey, to two beautiful parks in Manhattan, we created Verona with a gorgeous simplicity. We embraced that brawling love, that loving hate. This production outshone even the lofty dreams of a little girl’s heart. All of the elements, stirred wonderfully together, combined to be more than the sum of their parts. It wasn’t perfect. Nothing is. But it was astonishing.

I miss it already. I could perform this show, with these actors, in this production, over a hundred times more, and continue to get joy out of it. But I know it isn’t really ::relucant gulp:: over. Romeo & Juliet has branded itself in my heart and mind, to live on in legend. 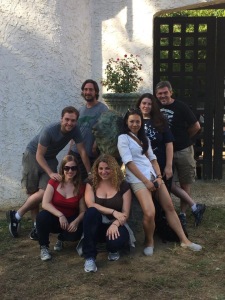 The Cast of Romeo & Juliet at the Maryland Renaissance Faire

I would be remiss not to thank the cast and crew by name: incredibly helpful and patient stage manager Kati Long (now a pro-level corset-lacer), remarkable fight choreographer Ian Heitzman, visionary director Kristen Penner; my good mother Esther Chen; the wonderful Benvolio/Paris, also Ian Heitzman; my honey nurse and dear cousin Tybalt, Lorelei Mackenzie; the astounding Friar/Lord Montague, Adam Baritot; my sweet Romeo, Keith Panzarella; and of course, my co-producer, our brilliant and loquacious Mercutio/Prince, Vanessa Wendt. If you have the chance to work with any one of these glorious people, do yourself a favor, and do so. 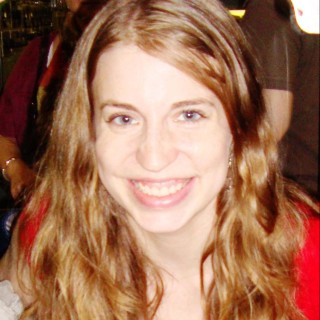